Louis Vuitton 101:
The Noé and NéoNoé 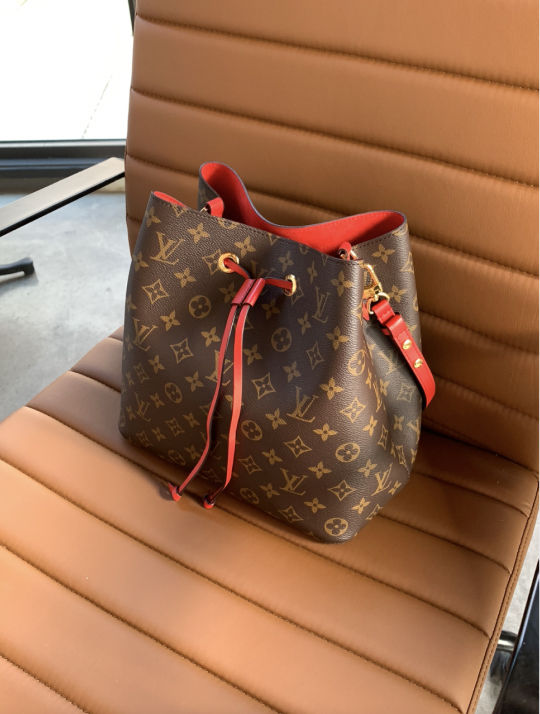 The Louis Vuitton Noé wasn’t intended to be a handbag.

Louis Vuitton’s iconic Noé bucket bag was originally meant to be a holder used to carry five bottles of champagne breaking them. As it gained popularity for a purse, the house turned it into one of its most popular styles. In 2017, Louis Vuitton introduced the NéoNoé, a more structured version of the original.

Louis Vuitton initially set its roots in a range of travel cases that varied in size from full-on armoires to small jewelry and hat boxes. Although the house was founded in 1854, it only delved into the world of handbags in 1932 — by accident. After the introduction of the first soft travel bag, the Keepall, in 1930, the Noé was created by Gaston-Louis Vuitton — the founder’s grandson — in 1932 as a vessel for champagne bottles. Designed to move champagne bottles without breaking them, the Noé was originally made as a functional piece. The sturdy bucket-shaped bag can hold five bottles of champagne on the sides with an additional fitting upside down in the center, and the grommet-secured drawstring at the top pulls them in tightly so they don’t bump into one another and potentially shatter.

The name Noé — the French translation of “Noah” — was a nod to the biblical story Noah’s Arc. In the story, Noah returns to dry land after the great flood to become the first winemaker of all time, and since this is the first mention of alcoholic drinks in the bible, Noah is said to be the starting point of alcohol consumption in the world.

Once the Noé started to become fashionable as a handbag, Louis Vuitton embraced its popularity and added additional sizes and materials. The now-iconic model is available in Petit, BB, and Nano sizes as well as the original. This bag is what most people think of when they hear the term “bucket bag” because it has become a commonf silhouette in the handbag family. The bag is functional for everyday life, holding all the essentials in its spacious walls – whether your essentials are your phone, wallet, and keys or five bottles of champagne.

In 2017, the NéoNoé came into play. The modern reimagination of the classic and functional Noé gave new life to this classic handbag, updating it with a stronger, smoother structure. Being more of a soft canvas bag, the Noé can be crinkled and bounces back to its original shape. The NéoNoé features structured walls and a minimalist shape. The bag also comes with a removable top handle so it can be converted from a crossbody to a handbag.

The vintage Noé has been a staple in many closets since its conception in the 1930s. Although this is a functional everyday bag that just about anyone can make use of for both normal life and travel, the Noé has been spotted on actresses such as Angeline Jolie, Julianne Moore, and Megan Fox as well as fashion influencers like @soniaheartsfashion. 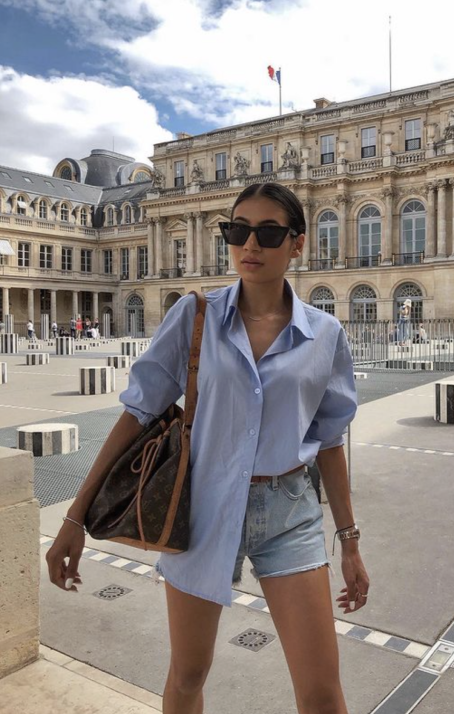 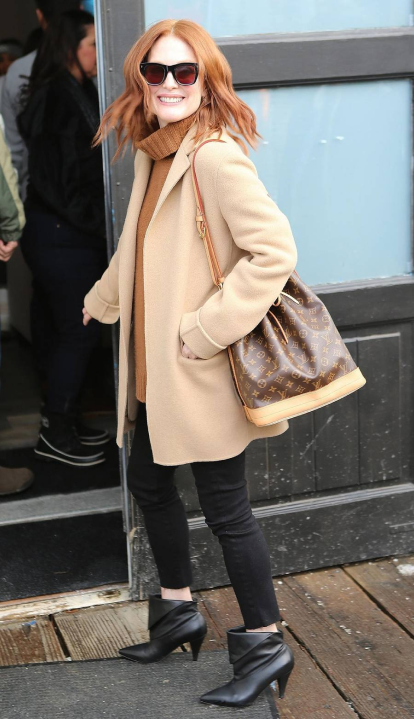 Supermodel Alessandra Ambrosio has been spotted a number of times wearing the Neonoe in her daily life. She is a perfect example of the functionality and versatility of the bag. She wears a range of different outfits for different occasions, all while accompanied by her trusty Neonoe bag. It seamlessly adds a classic-yet-modern feel to anything she wears, from running errands to dressing up, to traveling. 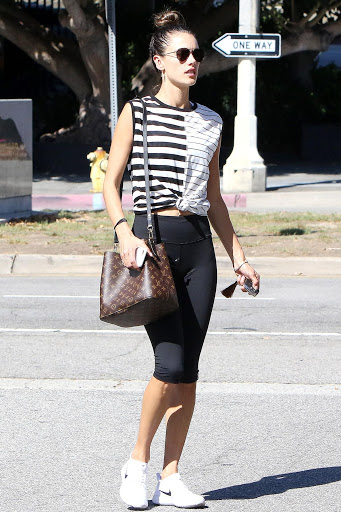 The Noé handbag is one of the oldest designs from Louis Vuitton, and it has many variations and styles; NéoNoé, on the other hand, is the newest member in the Noé family, launched in 2017. In general, Noé is a very sought-after model on the resale market due to its versatility and timeless design, and some popular and limited editions sell constantly close to or even over retail price. The most in-demand models include NéoNoé, Nano Noé, Noé BB, and Petit Noé. Taking Nano Noé as an example, the classic monogram canvas Nano Noé can sell up to 125 percent of the retail price. The best-selling model on Rebag is the NéoNoé MM in monogram canvas.

The Noé comes in three sizes that are available both on the resale market and on LV’s website: Original, Petite, BB, and nano. There is also a “Noé Purse” that was recently introduced, which looks as though the top half of the bag is cut off. The sizing for the items goes as follows (taken from LV’s current listings): 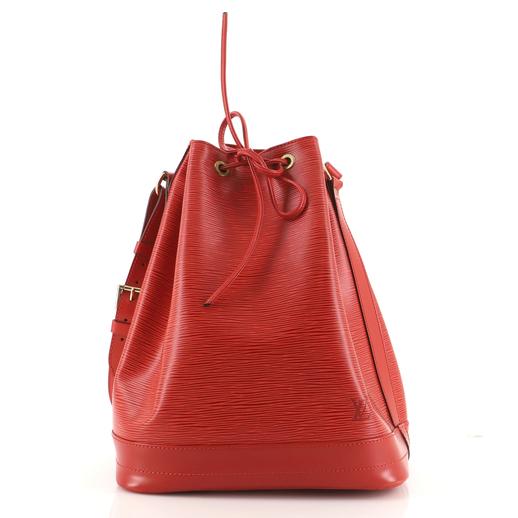 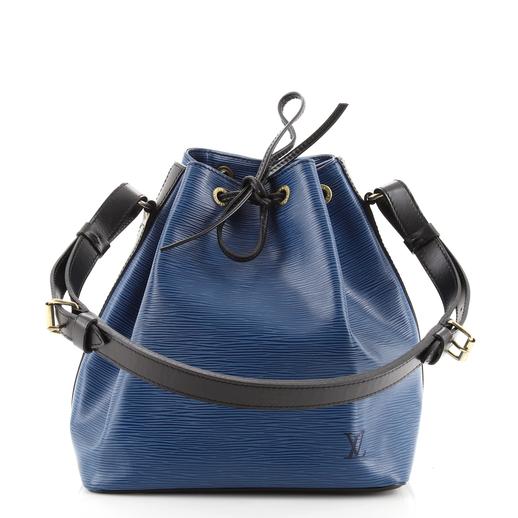 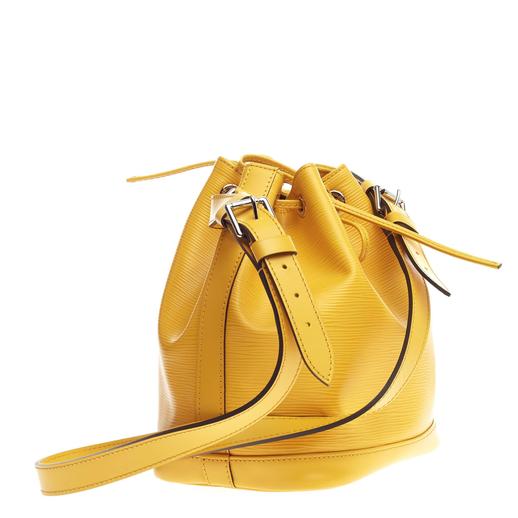 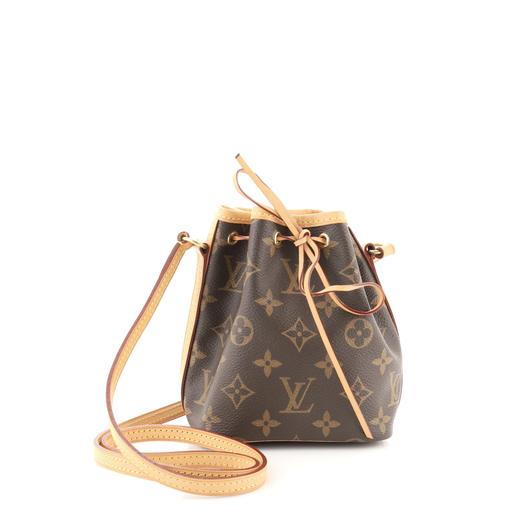 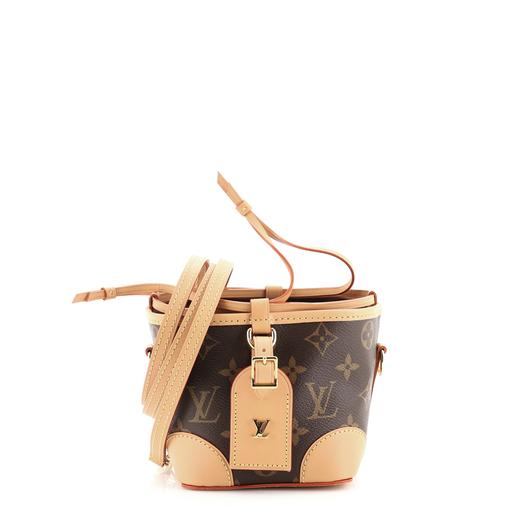 The bag comes in an MM and a BB size. The standard Neonoe size is close in size to the original Noé, but is about 3 inches shorter coming in at about 10 inches wide, and about 10 inches tall. The BB neonoe is still quite spacious at about 8 inches tall and wide, and can definitely hold everyday essentials. This works well for someone who wants to travel a bit lighter in their day-to-day life. 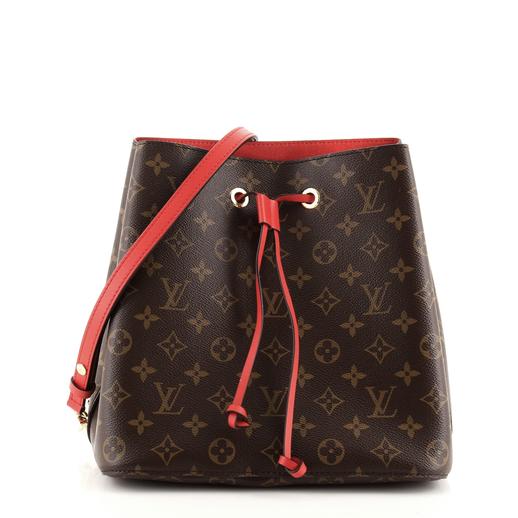 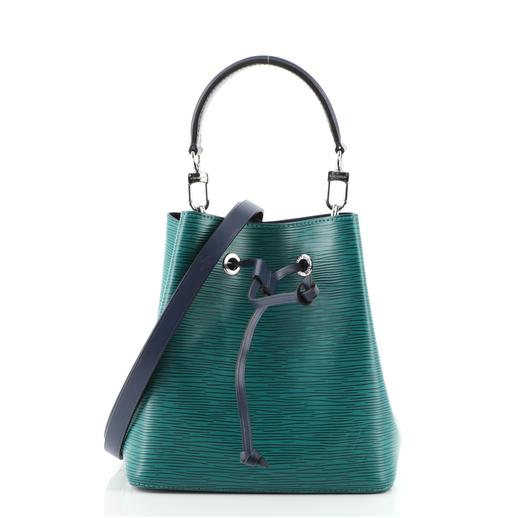 The Noé was originally created in the house’s signature LV monogram, which was created by Gaston-Louis Vuitton as an homage to his grandfather. The Noé evolved into bright and bold epi materials, both in solid Epi and with contrasting trim. The bag also appeared in the world famous monogram multi print that was introduced in 2003. The Noé was also used as inspiration for the Eden Noé Pêche bag that was popular in the 2010s. This special edition had shorter handles instead of a crossbody, featured a lock at the bottom right hand corner of the bag’s body, and was done in a striped metallic fabrication.

The NéoNoé has been adapted for an array of special collections, showing interesting takes on the iconic shape. A current adaptation is the Crafty collection that features contrasting black and white on an oversized monogram print. Another current style has a raffia-like texture with an oversized LV print overtop for a summery feel. Notable novelty versions and capsules were the Jeff Koons collection in 2017, the Jungle collection of 2019, and the Escale collection from 2020. 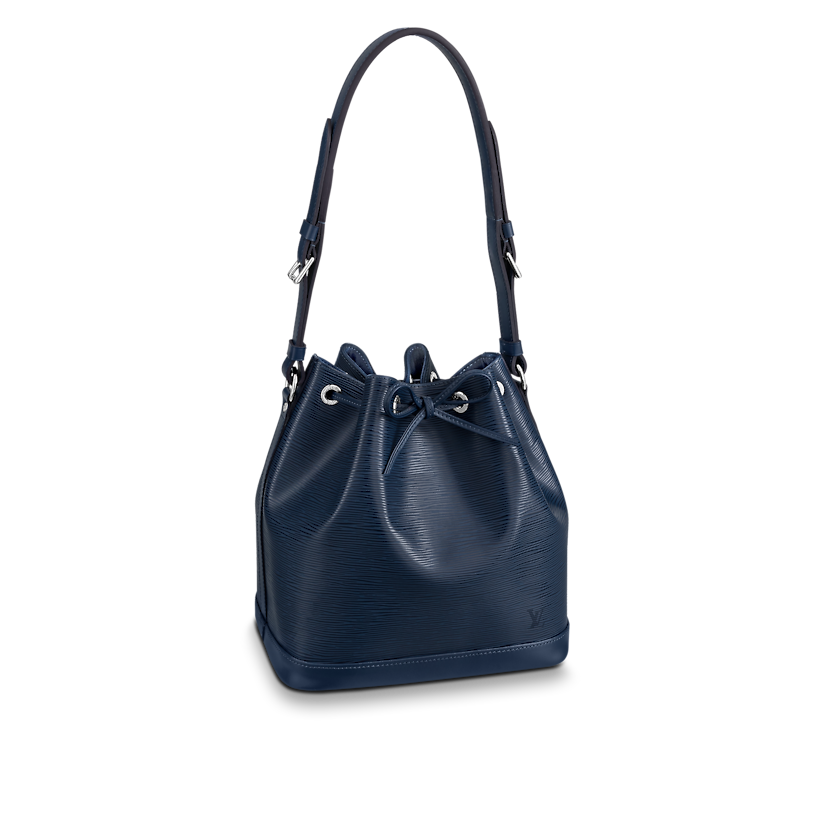 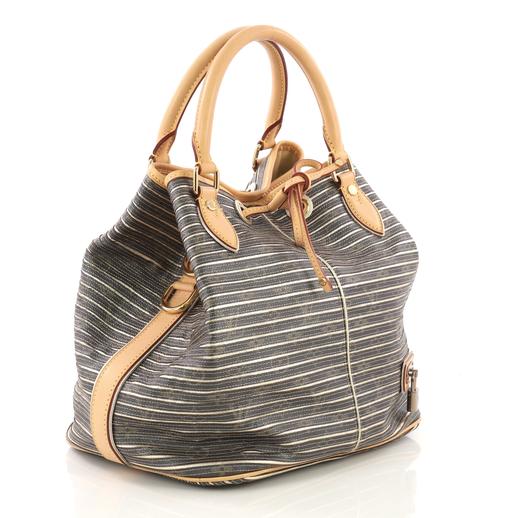 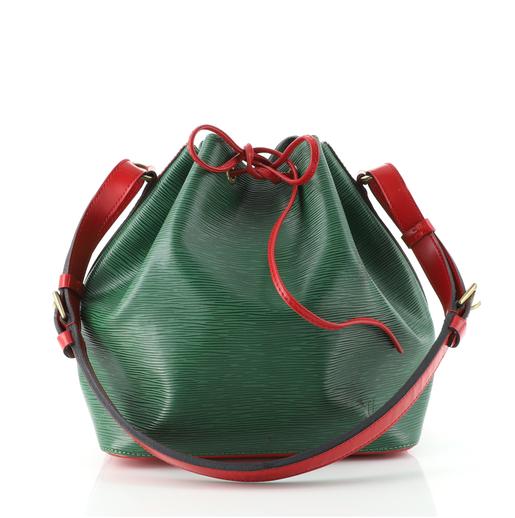 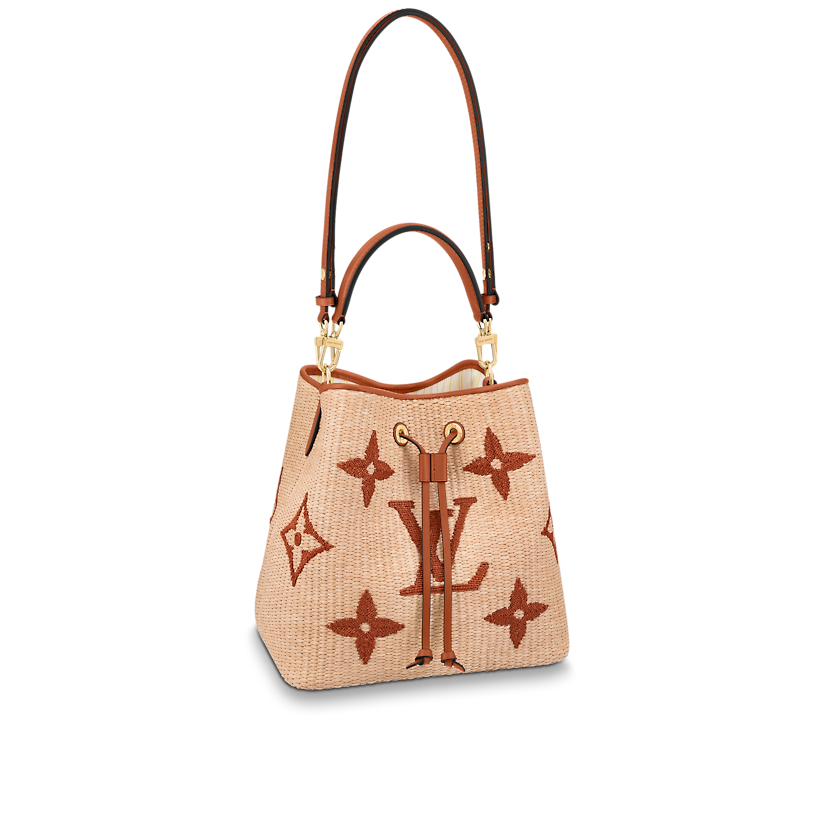 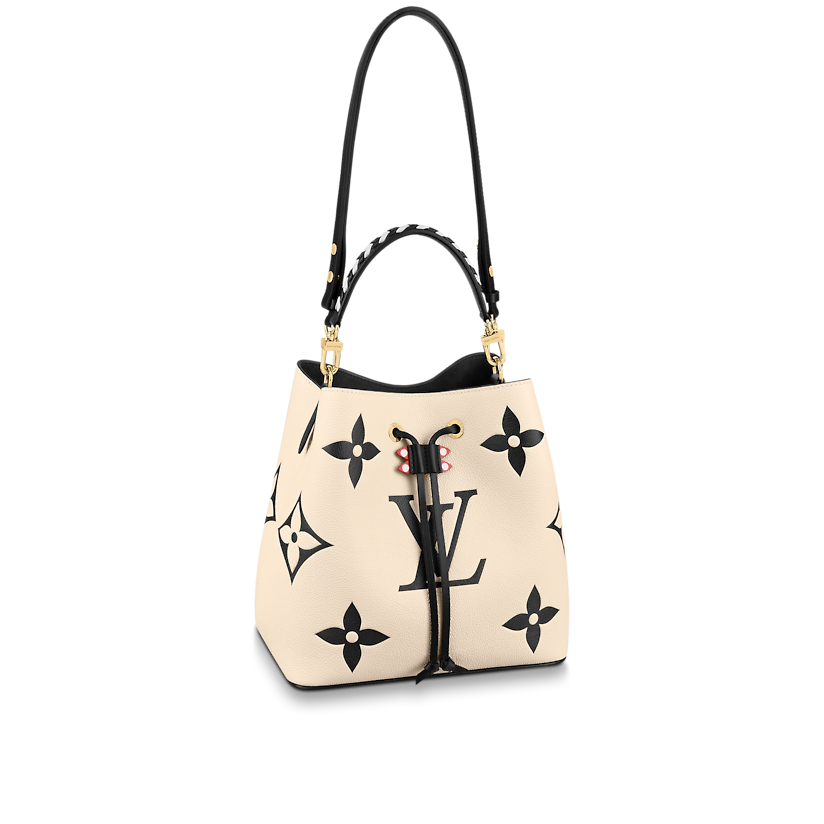 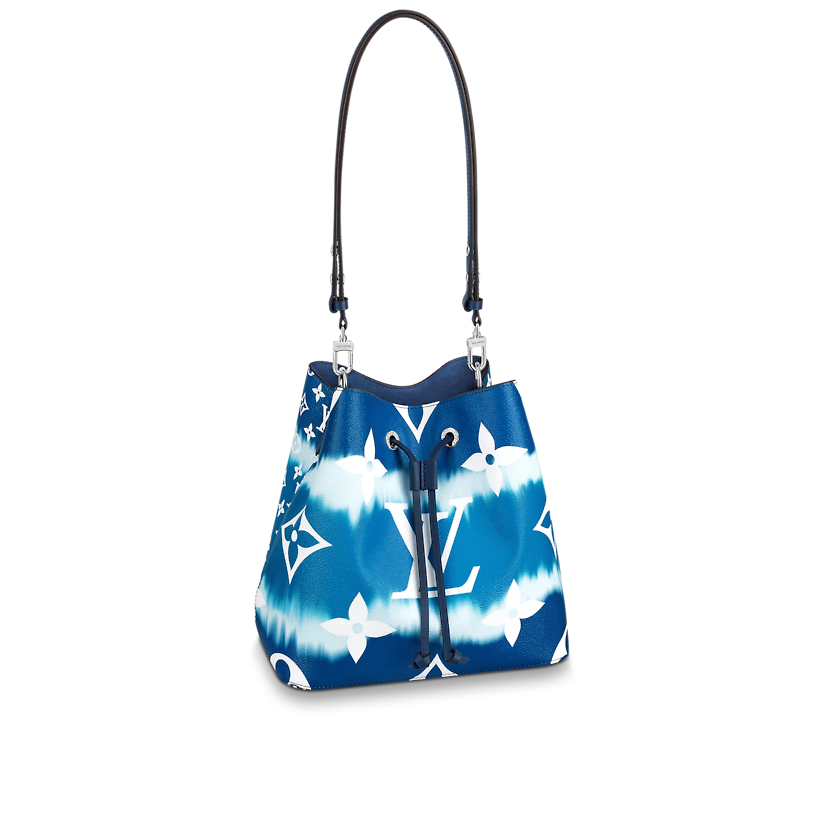 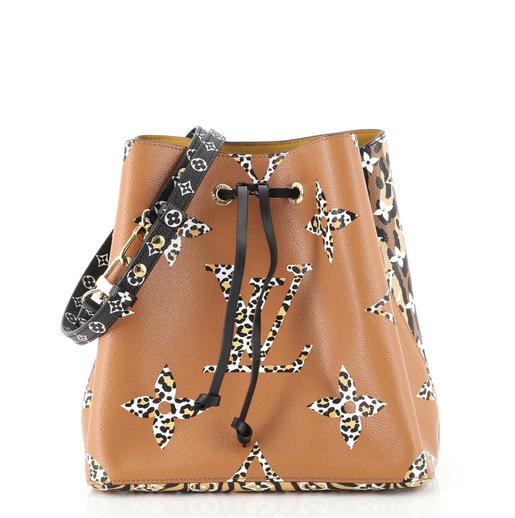 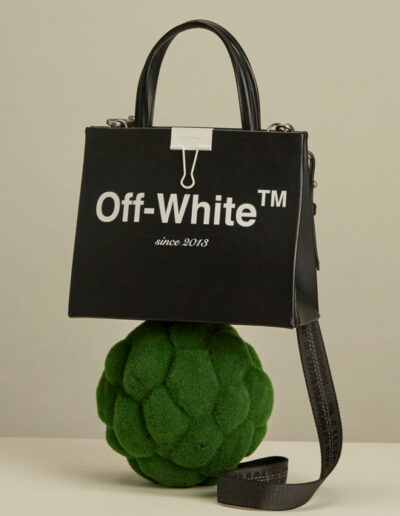 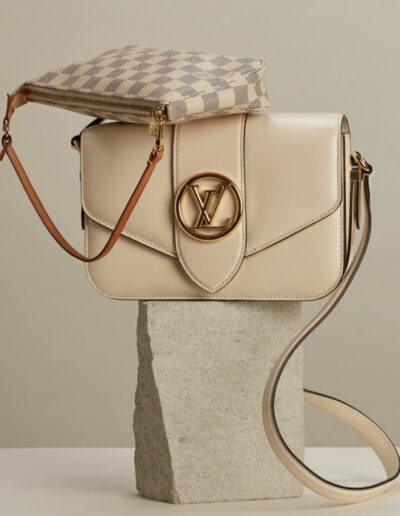